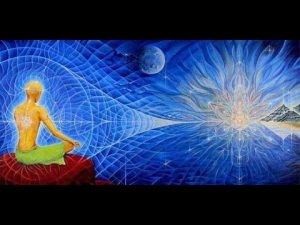 Suppose you go into a restaurant, sit down and look at the menu to help you decide what you want to order. Some restaurant even have fancy pictures of the different meals that they serve. Now you know that the menu and the fancy picture of the meal is not the actual meal, it is a conceptual representation of the meal.

Now you would never confuse the menu for the meal in the restaurant, yet we do it all the time with our unresolved emotions. We give it name, and the mind has a story about how bad it is. You can begin to notice that it’s a repetitive recording by becoming an impartial observer of your thoughts.

The story is only the conceptual representation of the actual thing, yet we consistently confuse it for the real thing itself. We are eating the menu!

So if you look at despair or hopelessness, along with all the other emotions you’ve been suppressing. You label it by giving it a name, and then there is your mind’s narrative, which is only a conceptual representation of despair—not the real thing itself (just like the menu).

The actual experience of despair lives in your body as stuck energy that feels unpleasant due to the make-wrong context you’ve been holding it in. You then do everything you can to distance yourself from the feeling—you suppress it.

Suppression anesthetics the body. Emotions are energy in motion. Every time there’s an energy that wants to be in motion, and you resist the feelings, that energy has nowhere to go, so it stays in your body.

Eventually that stuck energy will start popping out in undesirable ways like aches and pains, stress and tension, stiff joints and arthritis, illness, cancer, heart murmurs, and all the rest of it.

Most people then turn to the medical profession for answers. But modern medicine only treats the symptoms through the use of prescription medications or surgery. This is like building a house over a pool of quick-sand. Since the underlying cause has not been addressed, the patient will almost certainly eventually be faced with a similar or an even worsening condition.

So in order to get beyond quick fixes and symptom masking, you have to get to and eliminate the root cause of the problem. You have to let go of resistance & apply the 5 Step Harmonizing Method to the root cause, the actual thing itself, which is the layer upon layer of the unpleasant feelings that you have been resisting.

Circular breathing combined with the 5 Step Harmonizing Method creates the Breath Alchemy Technique. What we're doing is changing the way you respond to stressful situations. Circular breathing creates a new muscle memory and the 5 Step Harmonizing Method creates a new emotional response. These two things together will give you a new paradigm for dealing with all issues in your life, as they come up in the moment.

Eliminating the Root Cause

The human body, like everything, is not physical. It’s a holographic, illusoryphysical form, which in its’ base state, iswave form information.

This has massive implications for true healing.

Because what the medical profession and Big Pharma do, is treat the body. But the body is just a projection of its’ base state – wave form information.

That’s why it only treats symptoms, not causes.

The causes are in the base state ininformation distortion. If you harmonize the distortion, the body MUST heal, because it’s just a projection of its’ base state construct.

Breath Alchemy goes to the source. It works at the feeling level, allowing you to integrate the emotions that have been causing you problems. It does so a layer at a time in the process of harmonizing the distortion in the base state.

Circular Breathing, in combination with the 5 Step Harmonizing Method is one of the most powerful healing tools we have, and one of the least used. The body is like a pressure cooker; if the energy isn’t allowed to move, it builds up and eventually pops out in undesirable ways.

I have seen people heal every possible illness imaginable, from terminal to minor illnesses, with the power of Breath Alchemy.

I have personally healed a major crippling low back injury (this is what motivated me initially, to develop this technique), serious respiratory problems, an inner ear infection, arthritis and a heart attack---100% healing in every case.

I have also helped many others with their healing efforts. I had one client who healed leukemia (he was diagnosed as terminal) I've helped many people heal asthma, chronic sinusitis, high blood pressure, headaches, insomnia and so on.

If you look at the fifth testimonial, from Wilbur Albrecht, you will see a pretty dramatic example of the healing capability that is available from Breath Alchemy. Wilbur by the way, was a doctor---a burnout victim who was forced to retire at age 50. When I first started working with him in 2015, he and his body was falling apart. He is in great shape now.