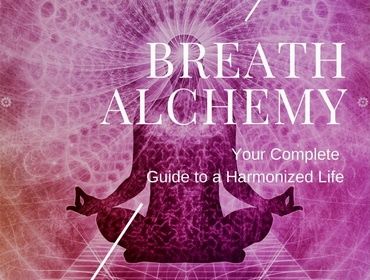 Dr. Alec Borsenko states, "Oxygen gets rid of toxicity. Bacteria, viruses and parasites are destroyed in the presence of oxygen-especially cancer." Breathing controls the flow of the lymphatic system. We have four times more lymphatic fluid then blood. Lymphatic cells release toxins from the body.

Paul Bragg, author of Super Breathing for Super Energy and also the person who developed the first health food store in this country in the late 1930's says in his book that we are slowly committing suicide in this country because of the way we live and breathe. According to Bragg, shallow breathing starves the body of vital oxygen and causes premature aging. Bragg notes that oxygen-starved people go to bed tired and wake up tired. They suffer from headaches, constipation, indigestion, muscular aches and pains, stiff joints, aching backs, and the list goes on.

Not only do most people breathe shallowly, barely using one-fifth of the lungs' capacity to increase oxygen flow to their bodies, but, on top of everything else, there is much less oxygen in the air to breathe. Two hundred years ago, our air was composed of 38 percent oxygen and 1 percent carbon dioxide. Today, because of pollution and other factors, it is 19 percent oxygen and 25 percent carbon dioxide.

Dr. McVea explains the importance of oxygen this way: "More than anything else, good health and well-being is dependent on the maximum production, maintenance and flow of energy, which is produced by oxygen. Oxygen contributes to proper metabolic function, better circulation, assimilation, digestion and elimination. It helps purify the blood, keeping it free from cellular build-up. Sufficient oxygen gives the body a chance to rebuild itself and strengthen its immune system. It is our natural defense against disease.

Medical research shows that over 90 percent of the body's energy is produced by oxygen, and that the more oxygen we have in our system, the more energy we produce. Our ability to think, feel, and act comes from the energy created by oxygen.

Breath Alchemy delivers vital oxygen to the body, delivering it to the blood, which in turn delivers it to our cells. Breath Alchemy is one of the greatest catalysts to keeping the immune system peaked. It also has a calming and energizing effect on the nervous system. A Breath Alchemy session is a total package for stress reduction, relaxation, good health and well-being. Oxygenation is the key to living a healthy and balanced life.

The breath is the vital link between spirit and matter, between pure energy and the physical universe. There is a life-energy that we are flowing in, that’s flowing into us and through us, and that sustains us. Breathing is like our umbilical cord to our true mother, which is universal life. It is the umbilical cord to life itself; it’s the bridge. You enter the physical world on an inhale, and you leave it on an exhale. Breath is that vital link between spirit and the body, it is a way of bringing Heaven onto Earth. It’s the link between the spiritual and the material.

With Circular Breathing, the inner and outer breath merge. The outer breath being the lungs and physical breathing. The inner breath is the flow of life-energy or prana. In a Breath Alchemy session you want those to join, you want your outer breathing to join with an internal rhythm, the inner rhythm of life. So you start out by noticing how you breathe naturally, and then expand it from there.

Everyone knows how to breathe, but to various degrees, their breathing has become inhibited. In general, peoples breathing started to become inhibited at birth. At birth, you are trying to breathe, but the amniotic fluid is inside your system, so there is a certain amount of a feeling of chocking. There are two things going on; one is that you have amniotic fluid in your mouth, nose, lungs and throat. The other is that they want you to breathe, so they slap you on the butt to get you to start breathing. So you breathe in, but what there is, is liquid there. So it’s like chocking because you are trying to inhale, but at the same time you have to spit out the fluid, so you get a chocking experience. What happens then is that our first experience of taking a breath is often paired with fear and pain.

It’s like Pavlov’s dogs where every day when it was time to feed the dogs, they would ring a bell, and then feed them. Pretty soon all they had to do was ring the bell, and the dogswould start salivating in the expectation of the food coming. Most humans have breathing and pain hooked up in a similar manner; and it is so subconscious that we don’t even notice it. So there is this deeply rooted, subconscious thought that breathing causes pain. That thought, as it lives in our bodies, works to stop the aliveness that we want more of.

Because it is beneath the surface, you may not be aware of any thoughts you might have that connect breathing with pain. But if you think about it, what’s the first thing you do if you’re walking along and you accidently stub your toe, and it hurts? You hold your breath. There is something in your body that says if I hold my breath, the pain won’t increase. It doesn’t go through your mind that way, but you automatically respond that way; just like Pavlov’s dogs salivating at the sound of the bell.

Another example is if someone runs a stop sign while you’re driving through an intersection, and you have to suddenly slam on your brakes in order to narrowly avoid a collision. What’s the first thing you do before you put on the brake? You hold your breath. Also if you are watching a sad movie, and you start feeling very sad, what do you do to make yourself not cry? You hold your breath and swallow.

So people are constantly cutting off that supply of life and love, without even realizing it. Breath Alchemy is the process of opening up your breath, and letting go of the association of breathing to pain to repair the experience of breathing, so you can experience more and more pleasure.

Most people then, are sub-ventilating, breathing less than they should be. Sub-ventilating anesthetics the body. Emotions are energy in motion. Every time there’s an energy that wants to be in motion, and you stop breathing, that energy has nowhere to go, so it stays in your body. Eventually that stuck energy will start popping out in undesirable ways like aches and pains, stress and tension, stiff joints and arthritis, cancer, heart murmurs, and all the rest of it.

Breathing is one of the most powerful healing tools we have, and one of the least used. The body is like a pressure cooker; if the energy isn’t allowed to move, it builds up and eventually pops out in undesirable ways.

Each one of the cells in our bodies holds our entire memory. The breath is like a flush, like what Drano does to a clogged drain. In a session, there is a certain amount of life-flow that is going through you, a life-stream. Ordinarily when we breathe, we barely touch that potential. Breath Alchemy is a way to increase the life-force in your body; there is a very distinguishable life-force energy, or love, that’s doing the healing.

When you’re breathing efficiently, you are breathing life-force energy (prana) as well as oxygen. This combination keeps the body clean---it flushes the nervous, circulatory and respiratory systems as well as the aura or energy body. It cleanses physic dirt, negative mental mass, physical tension, physical illness and emotional problems out of human consciousness.

Your breathing is the main regulator of the flow of life-force energy (prana) in your body. The breath is the vital link between Spirit and matter, between pure Source energy (prana) and the physical universe. In a Breath Alchemy session, you are very aware of this life-force energy flowing through you. You can readily feel its soothing healing currents of divine love and know that every function of your physical being is whole and complete. That plus holding the idea of perfect health in your consciousness is the key to your healing. See yourself in your true form as pure consciousness. See yourself as radiant health, filled with joy and peace and doing everything you want to do in your life. This is who you are, so claim it!!

I have seen people heal just about every possible illness imaginable, from terminal cancer to minor illnesses, with the power of the Breath Alchemy Technique. In addition to having completely healed my back, I have also healed my respiratory system; and considering that my family has a long-standing history of emphysema, I considered this to be a major accomplishment! As a child, I had hay fever that kept me in a constant state of misery in the spring and summer, and far too many severe colds that would keep me in bed for periods ranging from a few days to a few weeks. I was diagnosed by some quack masquerading as a doctor, as being allergic to just about everything. That is now all history.

The breath is a tool to transform your body. Instead of thinking that your body is a limitation that you have to transcend, you bring your body with you; you expand the energy in your body. It is called illumination, or transfiguration. The density of your body begins to dissipate because you’re not holding. So you lighten up, also called enlightenment.

Any physicist will tell you that all we are is light, but the light gets so jammed up that it seems massive. If your cells are all jammed together, your breath is a way of separating them.