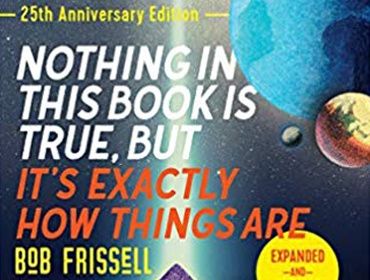 Author of Nothing In This Book Is True, But It’s Exactly How Things Are – 25th Anniversary Edition

Where are you from originally and where do you reside now?

I grew up in Fargo, North Dakota. I currently live in Sonoma, CA.

If you currently reside somewhere besides where you were born, what’s the story that lead from there to here?

I moved to CA from Minneapolis, MN in 1971. Even though it seems like a few lifetimes ago, I clearly recall being motivated by a strong inner desire that was telling me it was something I had to do. A specific reason was not given; and it did not matter.

This was my first experience in learning to follow my inner guidance without hesitation.

What made you decide to write and publish your first book?

Even though it has been twenty-five years, in many ways it seems like only yesterday when a guy named Richard first came to me as a breathwork client. Though skeptical at first, he had an unexpected experience in that first session that resulted in twenty-nine additional weekly visits. During that time a mutual understanding and trust quickly developed between us that led to a most unexpected result.

Yes, I learned that Richard owned a publishing company, and no, I was not auditioning to write a book. In fact, I had internally decided just four years earlier when asked to co-author a book with a breathwork client—and upon learning that she was in fact suggesting that we write a book proposal that we would then use to seek a publisher—that the only way I would ever write a book was if a publisher came to me and asked me to do so. I thought I was safe; but that of course, is exactly what happened.

Prior to this fateful meeting in October 1992, for the previous twenty years I had been an active seeker; I was motivated primarily by an intense desire to heal myself of a crippling low back injury. Upon realizing that everything is a function of consciousness that can only be realized by looking inside, I dedicated myself to exploring the gap between who we think we are, and who we really are. Then I was exploring ways of taking it out of the realm of conceptual understanding and making it real in my life.

Breathwork became my primary tool for doing so; it was a technique that was creating real and lasting healing, and transformation in my life—as well as in the lives of my clients.

Now back to Richard—I quickly learned that his company North Atlantic Books, had published Richard Hoagland’s book The Monuments of Mars.

Since I had recently come across new and essential missing information regarding the unity of life that I knew I needed to be aware of, and since it originally expressed itself in a most unsuspecting way in the form of other life forms throughout the cosmos, with Mars being one of the centers of attention, I continually pressed Richard for more and more information.

And of course, I willing shared with him all of what I was learning. So, one day I received a phone call from Richard asking me if I would consider writing a book on what he termed, “the esoteric meaning of the monuments of Mars.” And though my first thought was “No, I’m not an author,” I suddenly remembered my decision of four years earlier, and I instantly realized that there were higher forces at work here.

How would you describe your books to first time readers?

I detail from a big-picture perspective, the enormous infusion of higher dimensional energy that is dramatically raising the vibratory rate of the planet and everyone on it. I also give the details of the personal transformation that we must make if we are to survive and thrive, so we can “catch the ride” into higher consciousness in a way that enables Mother Earth to reach critical mass and become lit from within. This is the story of nothing less than the birth of a new humanity, of the co-creation of Heaven on Earth.

Who do you feel is most likely to connect with the topics you write about?

This is for everyone who is ready to lift the veil, and begin the process of discovering that there is much more to life than they have perhaps previously believed.

This puts them onto a pathway that soon becomes a spiritual quest that leads to the realization that they have everything they need, and it is all contained within them.

We live in a time that can be deeply moving, but first, you must be listening with your heart. When you are, you can begin to find a common language that is beyond right and wrong, good and evil.

Your Higher Self is still within you, and it functions well beyond the capabilities of your mind. Reconnecting with this severed aspect of ourselves gives us access to our unlimited potential; where we have reliable access to an infinite supply of inner peace, unconditional love, joy, creative expression and wisdom. This is the energy of Divine Creator, it is the energy of Source.

What unexpected or surprising thing did you learn during the process of writing and publishing?

Nothing In This Book Is True, But It’s Exactly how Things Are quickly to my complete surprise—and through word of mouth only (not one dime was ever spent on marketing it) —became an overnight sensation.

It has subsequently been published in twenty-five languages, it has sold in excess of five hundred thousand copies.

In this special edition I have kept intact the basic message of the previous edition; I have also expanded upon it by including significant additions and updates, including ten completely new chapters.

If you could, what advice would you give to your past self before embarking on this journey?

I would advise my past self to let go of my fears and doubts, and trust that I was the perfect person to write this book.

How many people would you ideally like to reach with your books?

What has been the biggest challenge and frustration during the process to date?

My biggest challenge was, 25 years ago, when I was convinced that since I wasn’t an author, that I had no idea of how to write a book.

I gradually learned how to get out of my mind enough to allow myself to tap into the creative flow. At that point, the book began to almost write itself.

What’s your biggest strengths when it comes to book a) writing, b) publishing and c) marketing?

I have been an active seeker for many years; I was initially motivated primarily by an intense desire to heal myself of a crippling low back injury. Upon realizing that everything is a function of consciousness that can only be realized by looking inside, I dedicated myself to exploring the gap between who we think we are, and who we really are. Then I was exploring ways of taking it out of the realm of conceptual understanding and making it real in my life.

This has proven to be a never ending journey that has served me well in the writing of my books.

My greatest strength in the areas of marketing and publishing was in creating a publisher who came to me and asked me to write a book.

Then I was fortunate enough to have written a book that became an overnight sensation. That meant that all the marketing was done for me, as I was suddenly very much in demand.

What’s your biggest weakness when it comes to book a) writing, b) publishing and c) marketing?

My biggest weakness in the area of writing is in letting go of my doubtful mind enough to realize that I have plenty to say, and then in trusting and letting go enough to let it all flow through me.

I have a good publisher so I don’t really have a weakness there.

I have learned a great deal about marketing, but I often times have difficulty in sufficiently motivating myself to put into practice what I now know.

When do you think you will write your next book?

My next book will be published within two years.

Are you self published or did you use a hybrid publisher, or a traditional publisher?